Mike Ruffin is a retired city and county manager, having most recently served as Durham County Manager for thirteen years before retiring in 2014. As the county’s chief executive officer, he managed an organization with 1800 employees and an annual budget of over $500 million. Prior to coming to Durham, he held similar posts in the Atlanta, Charlotte, and the Raleigh‐Durham metropolitan areas. He served as a city or county manager for over 36 years.

Under his leadership, Durham County was recognized across the country for innovative services and was in the top 1% of counties nationally for its outstanding financial and debt management. His administration reduced the property tax rate by 22% during which time hundreds of millions of dollars in improvements for new libraries, schools, a courthouse, a human services building, and other county office buildings were completed.

Durham County Government was also a frequent recipient of national and state awards for its services and entertained visitors from around the world seeking to learn more about how its services are delivered. It enjoyed a national reputation for outstanding economic development. Thousands of new jobs were created during his tenure, and almost two billion dollars in new investments were generated. His administration was also a major player in the resurgence of downtown Durham and partnered with the City of Durham and Downtown Durham, Inc. to make the American Tobacco Campus and the Durham Performing Arts Center become realities.

He is a graduate of East Carolina University with a B.S. Degree in Urban and Regional Planning, holds a Master of Public Administration Degree from the University of North Carolina at Chapel Hill, and is a certified mediator having trained at the University of Georgia’s Carl Vinson Institute of Government. He also holds life memberships in the International City and County Management Association (ICMA) and the North Carolina City and County Management Association. 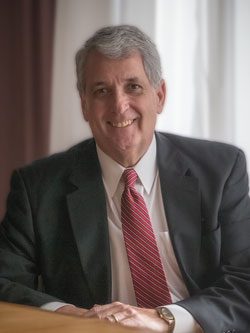